It's not a great photo, but this was my work yesterday. 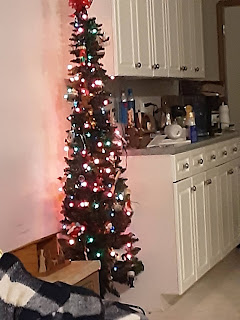 It doesn't look like a lot but it was.
There was a layer of cleaning.  Maybe tidying is a better word.  There were things filling the cupboard corner all the way to the end of the wall.  It wasn't messy just piled.  It is just too easy to set stuff there to put away later, be it downstairs or in my space.  Part of setting up the tree was dealing with later and dealing with it properly.
This tree usually gets all my red and white decorations but this year, it has all of Keith's ornaments on it.  As they grew, my grandmother, while she was still alive gave the boys each ornaments, and my mom did the same and so did I.  Plus there are a few interesting things from school and things they made.  It's a kind of sweet trip down memory lane, even for Keith who doesn't  want Christmas in his living space at all.
My tree of collected ornaments goes up today.  It's  a larger tree but not a huge.  It sized for small space living but remains full size.  And then, the rest of it.
When I lived in my wee house, I down sized my Christmas decorations.  I don't have the miles of garland anymore and I don't  have stuff for each door.  There is a bit though and that, plus a few special things will go out in a bit of a new space this year. I moved a Kallax book case into the hall and it is a perfect spot for Auntie Lorraine's beaded tree, a music box, and some funky Santa's.
So much to do.  So many Monkey's too stuff.  Eeeeeeeep.  I will get there.  Magically.  It will happen and it will be fine.
Posted by Needles at 08:06 No comments:

No knitting today.  It was a day filled with household and errands and getting out the Christmas stuff.  It sounds as if my wee people and their moms and dads are coming for Christmas.  Grandma is going to have to do a tiny bit better than she did last year with respect to decorating.
I did get all the monkey bodies completed and the first body is ready for stuffing.  I did not want to pull out the stuffing till I have the tree boxes put away and all that stuff up.  In lieu of knitting monkeys, I am knitting the little backpacks where in they will carry something special for my kids.  Did I say knit?  I am crocheting them actually.  It is quicker and sock yarns are a great weight for it.  Nothing fancy to be sure.  It's just a little messenger style bag with a nice flap and straps to turn it into a nice backpack.
So not a lot of knitting content today, and most likely, not tomorrow either.  But Christmas is happening here and that is enough to be doing.
Next week is baking week and the week following...  Well, it is getting everything else ready so that on the day, brunch can happen magically or with Keith's help.  Either way it is good.
Posted by Needles at 20:48 No comments:

The path to getting there.

It is all in the path you take to get there.  Seriously.
By mid morning, I had finished the body I started yesterday.  So I picked up another set of legs and did as I planned.  I changed to work the first few rounds of the body on two circular needles.  It changed everything.
By noon, another body was very nearly complete. 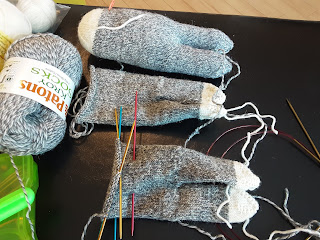 Once I was up the body about a quarter of an inch, I changed to my time tested dpns.  For the tight knitting near the join, the circs were fine, but no way can I knit faster with those needles than I can on dpns. 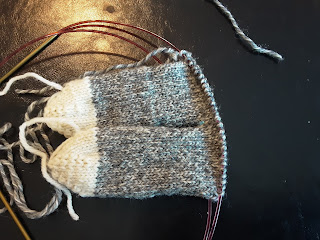 By the time my hands gave out just about supper time, there was carnage everywhere. 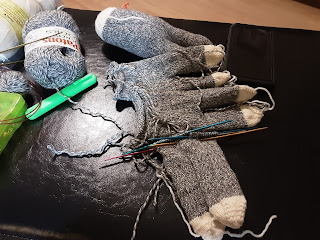 Two complete body and leg sets and a third with only an inch to go.  There are only two sets of legs after that.  Tomorrow ought to take care of that nicely.  Changing the start of the work made a huge difference.
So the plan is to get out the stuffing and knit the top of the monkey heads as I stuff each body, then arms.  I will sew and stuff tails too.  Once everything already knit is stuffed and attached I will sit down and knit the snouts of my monkeys.  The snout as from the pattern looks a bit off at this scale,  too large I think, so I may have to change it up a bit.  The ears were too big but I have that figured out and they take no time to knit at all.  I feel like I am in a really good place here with all the monkeys.
My shopping is done.  My monkeys are looking good.  I just need wrapping paper, the tree set up and then it will be time to sort out the cooking and the cookies.  Still a lot to do before Christmas and yet, I feel pretty good.
Posted by Needles at 20:40 No comments:

Email ThisBlogThis!Share to TwitterShare to FacebookShare to Pinterest
There was sewing Tuesday, but it did not go so well as the first day.  Without completion, it just looks like a pile of nothing.  It will wait to be blogged about till then.
I knit yesterday. 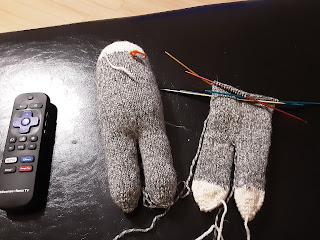 I knit on bodies yesterday.  Just one in truth but it's a start.  And just like all the small parts, getting there starts out fussy.
I debated about switching needles to a circular pair I have but it needs cleaning.  It's one of those old brass covered addi ones, where the whole tip tarnished over time and with use.  I have a pair of these in the right size, purchased for using two circs for colour work, but I haven't used these yet.  The next body I will give it a go, at least on the first rows where the join, just like with sweaters, is a kind of a pain.
Bodies are on the way. It will be so nice to get these done.  I'm  looking forward to stuffing day. Body stuffing day.  The other stuffing is going to have to wait a while.  I have a few weeks till that day.
Posted by Needles at 08:00 No comments:

Quotes of the Day